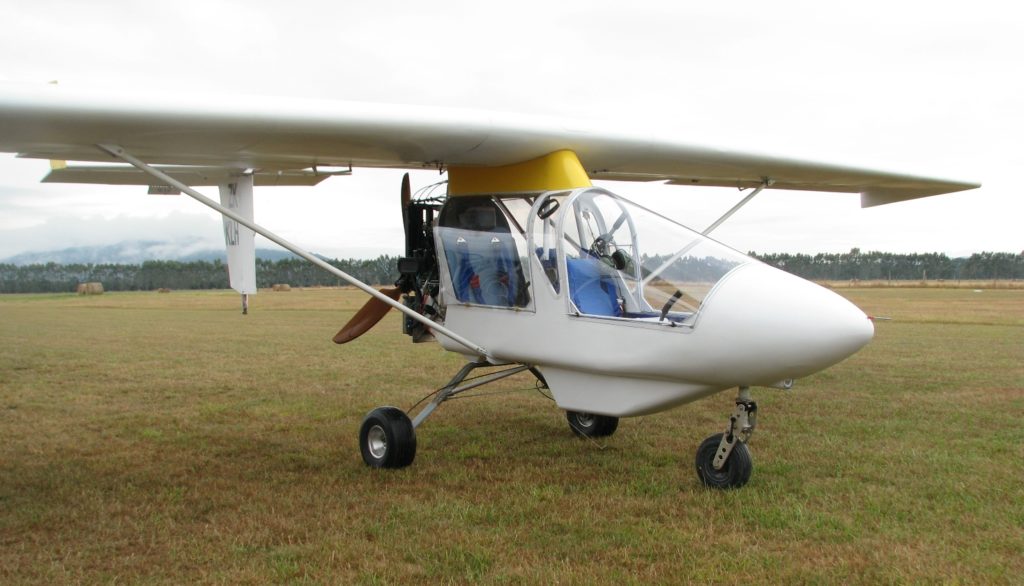 Another weekend up at Manapouri Airport getting the Shadow B-D microlight aircraft ready for flight.

This time, the weather was calm and fine.  It was ideal for Murray Hagen, the RAANZ test pilot, to carry out high speed taxi tests and short hops.

Murray was pleased with the handling of the Shadow. He found that the right brake wasn’t working and the elevator trim tab needed adjustment, so I had some work to do overnight.

He also wanted more pitch on the new Thompson wooden prop to reduce maximum static RPM. During the day, we kept tweaking the pitch, gradually increasing it to 19 degrees (@ 75% diameter). This process was made much easier by the nifty “Clinometer” app on my mobile phone.

A significant change from last week, was to add a third radiator to keep the engine cool during the ground runs and taxi tests. The twin ‘tall’ radiators only work effectively when in flight, so with the 30 plus degree temperatures that Southland has been having, the Rotax 582 was having trouble keeping cool. 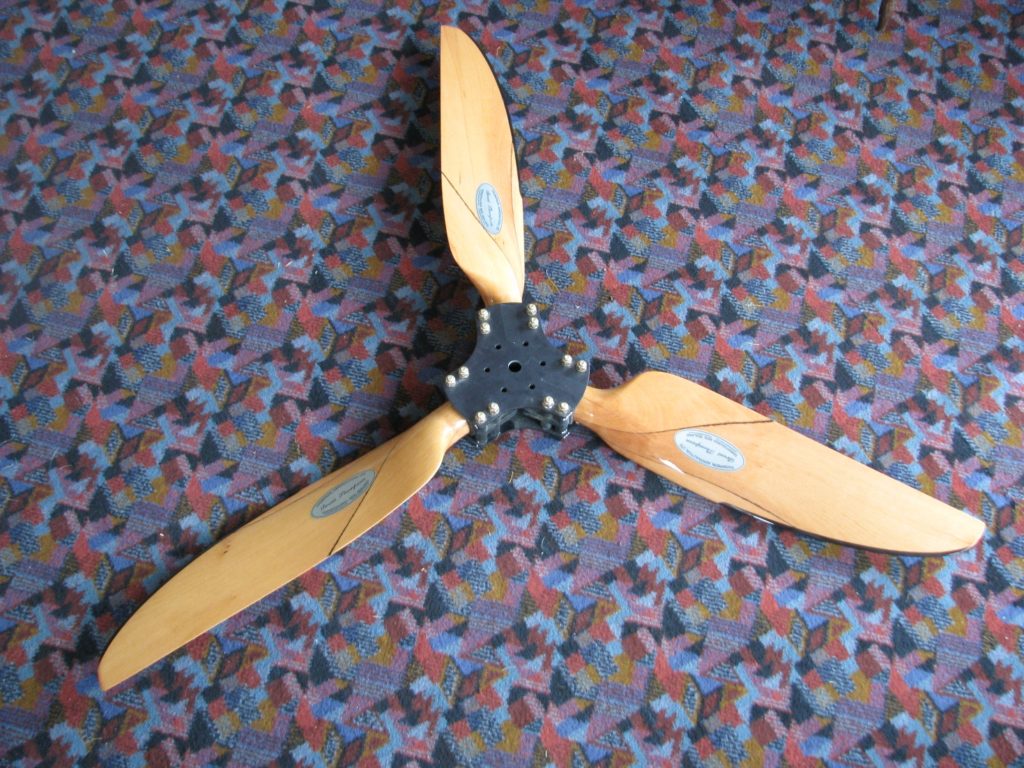 Last important job is to assemble and pitch the laminated wooden prop. This work of art was beautifully crafted by Brent Thompson. It uses the Precision Prop hardware, but he optimised its scimitar blade shape for the Shadow 582.

At last, everything is bolted, screwed, glued or wired onto the Shadow microlight. Oil and fuel are in their respective tanks.

Right, no more procrastinating. Just get on with the engine start. OK, roll the Shadow outside.  Malcolm and George appear like magic and offer encouragement.  Tie the aircraft to a couple of fence posts. 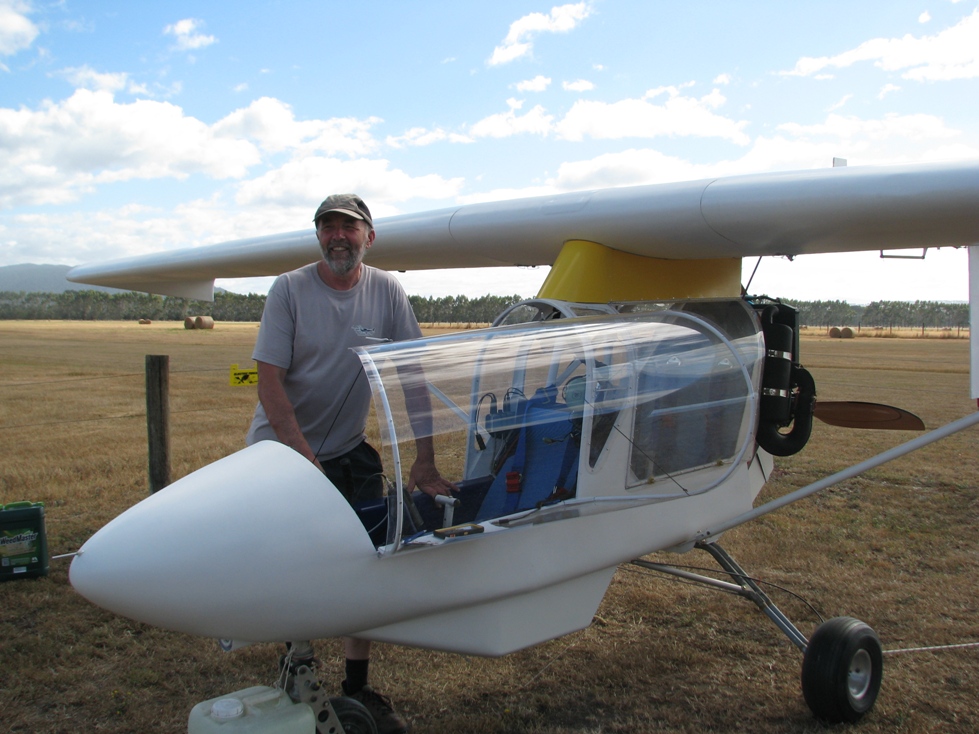 Bit of mild panic, while the ignition key is searched for! Subconsciously delay a bit longer, by checking a few more bits and pieces. OK, let’s do it.

After a few pulls, the Rotax 582 fires up easily. A huge relief after all the effort to get to this stage.

Over the next few minutes, we check things over.

Then it’s switch off, push back and go home. It’s been a long hot 4 days.

*Next day my tacho reads only 1000rpm at idle, so it’s clearly a dodgy unit. We temporarily solve the problem by swapping it with the tacho from Murray’s 582 Thruster.

*** Tossed out the plunger primer. Too scary to have fuel dripping out! 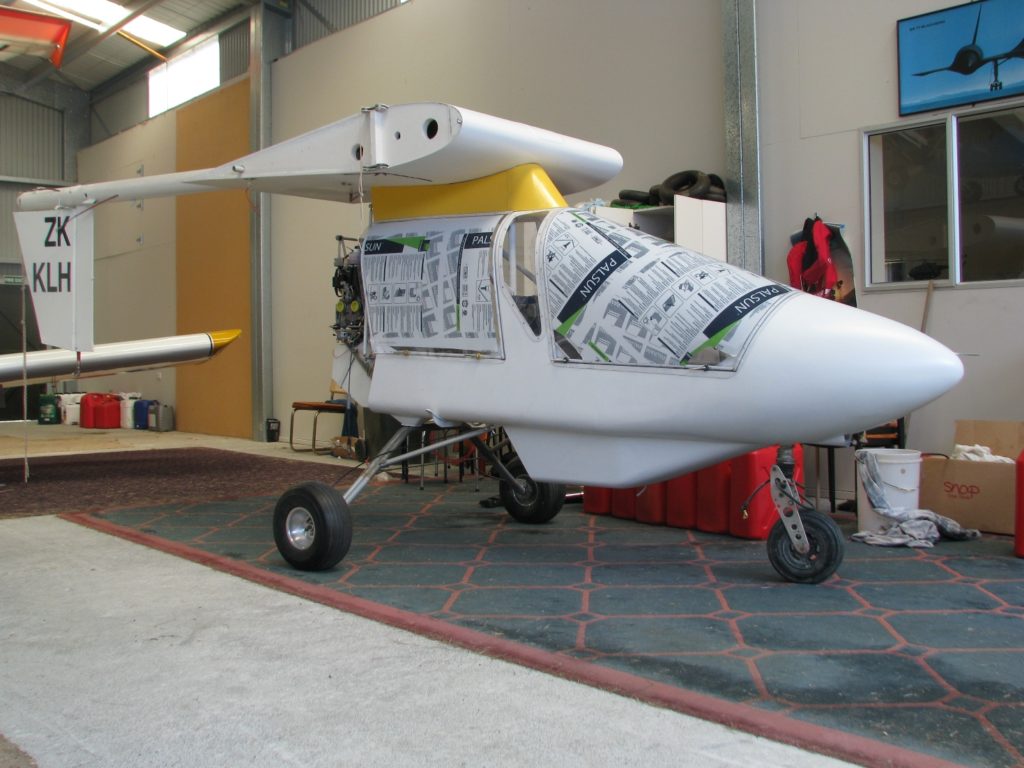 My wife and I, assisted by Malcolm Swanson, unloaded the Shadow microlight at the Fiordland Aero Club’s hangar at Manapouri Airport.

Over the next few days, I worked on installing the gearbox, radiators, carbs, etc.  My wife helped by gluing the blue closed-cell foam foam padding onto the seat bases/backrests, securing the electrical wiring inside the cockpit and applying the vinyl labels to the instrument panel. 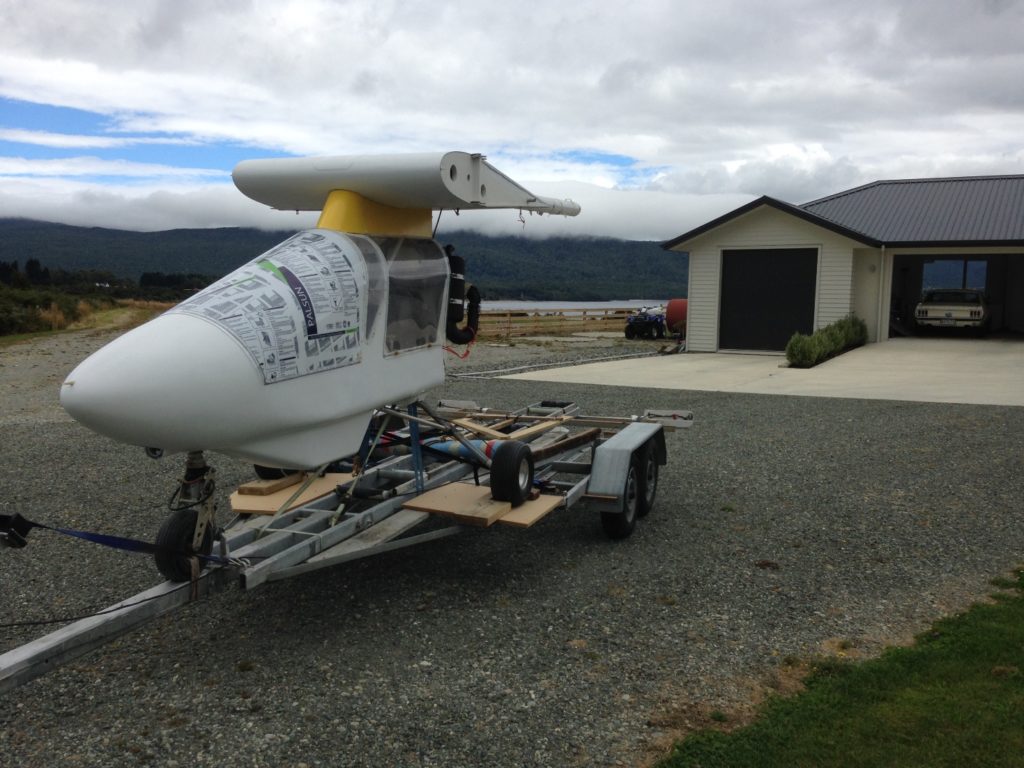 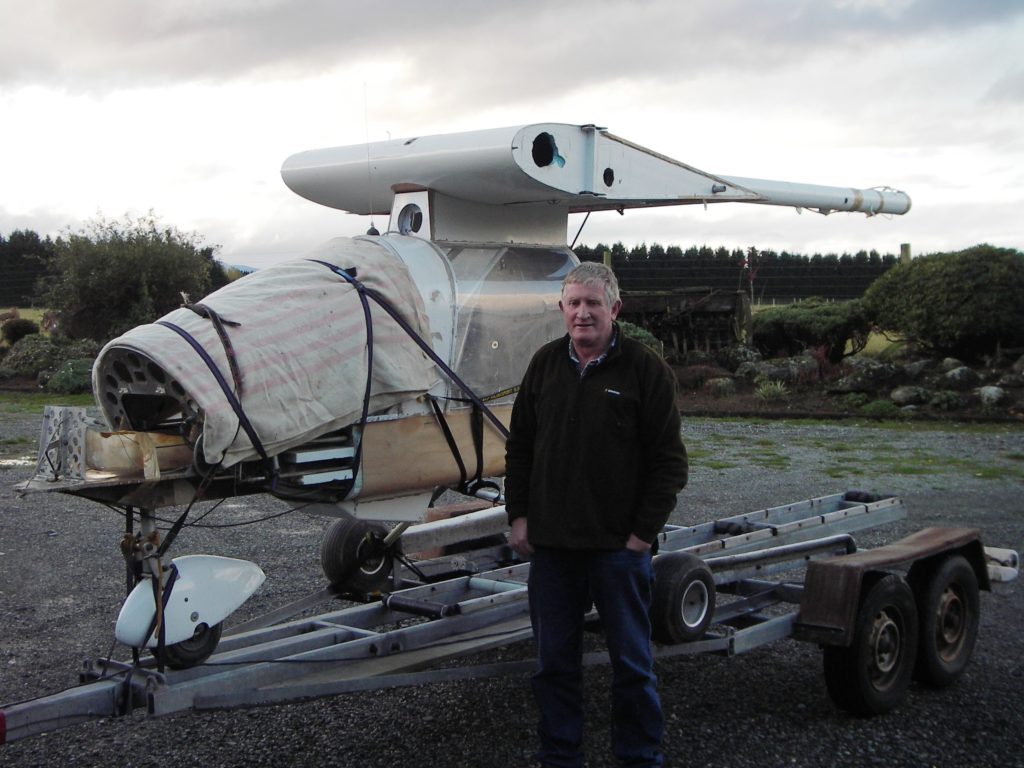 Nearly 8 years apart, both these photos are taken at Murray Hagen’s home near Manapouri.

So here it is, the same Shadow, but considerably restored and improved.  Almost everything has been dismantled and re-assembled, with repairs as necessary.

The ‘points’ ignition Rotax 532 has been replaced by a new Rotax 582 with dual CDI system. Larger radiators for better cooling.  Larger footwell for rear passenger. Landing gear uprated from 395kg to 450kg. Extra side windows. 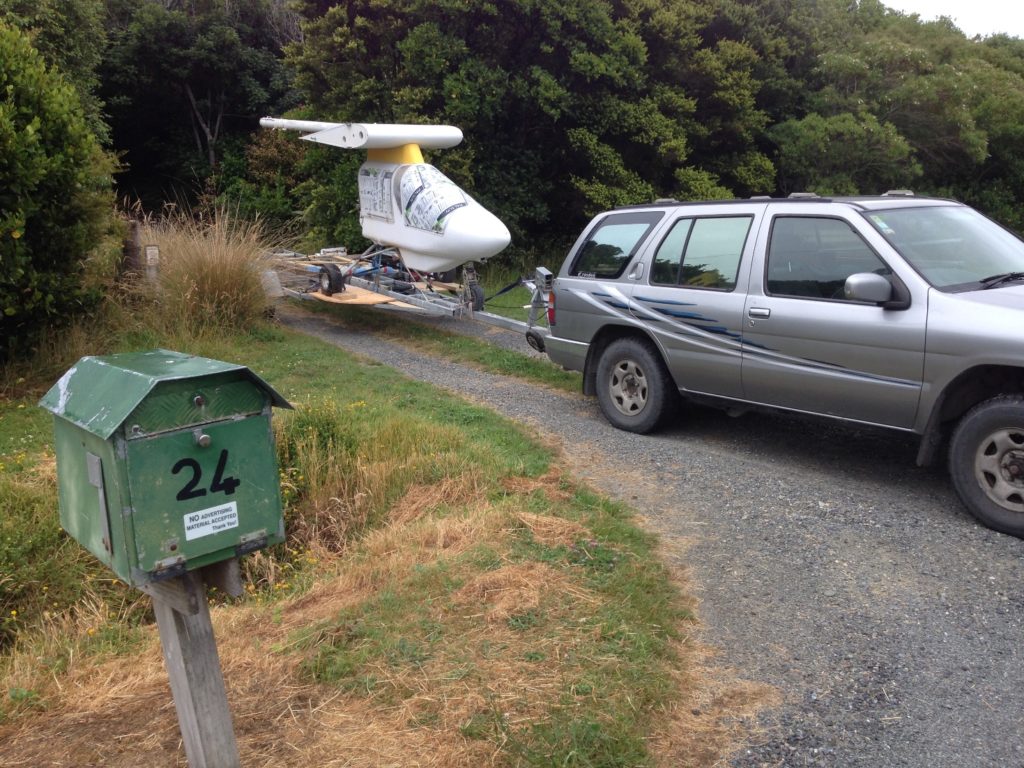 Immediately after our Christmas and New Year holiday with our family at Lake Manapouri, I headed back home to Invercargill.

The aim was to prepare the Shadow for transport 150km to the Manapouri Airport for final assembly, engine start and test flying.

My son patiently fitted the various sensors to the engine and connected a myriad of coloured wires up to the voltage regulator and/or the wiring loom.

I concentrated on miscellaneous tasks, such as fitting seat belts, setting up the pull-start system, mounting the oil injection tank and fabricating a horizontal fuel pump mount.  I also checked the operation of coolant temp sender, thermostat and gauge, and the fuel sender and its gauge.

Finally the Shadow was loaded onto our yacht trailer for the trip back inland to Manapouri. 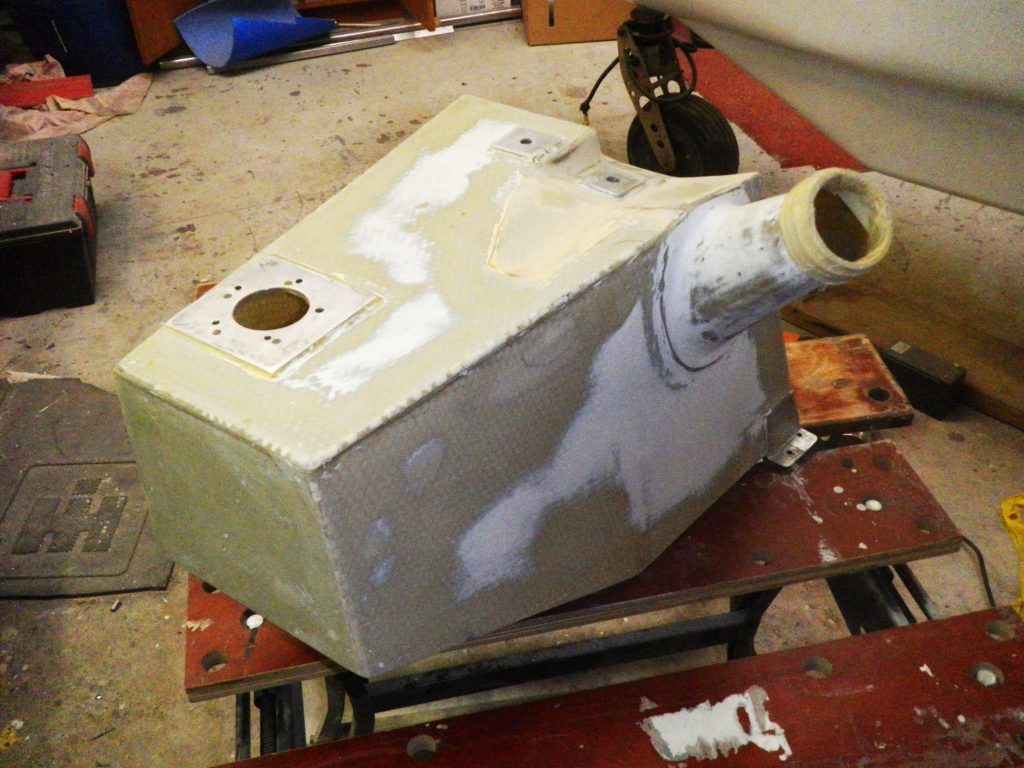 The original fuel tank, made from panels of aluminium honeycomb core sandwiched between phenolic skins, was looking a bit sad. It deserved some attention.

The tank’s interior was in good condition, except that the fuel outlet mesh screen (made from a “tea leaf strainer”) had come adrift. However, the exterior seams had some worn areas.

After careful sanding, I filled any voids with epoxy filler, then glassed each seam. After final finishing, the tank looked much more presentable.

I created a large finger strainer from 0.3mm brass mesh and soldered it into the outlet fitting. Hopefully this will prevent larger bits of rubbish getting into the fuel line and clogging the fine filter. 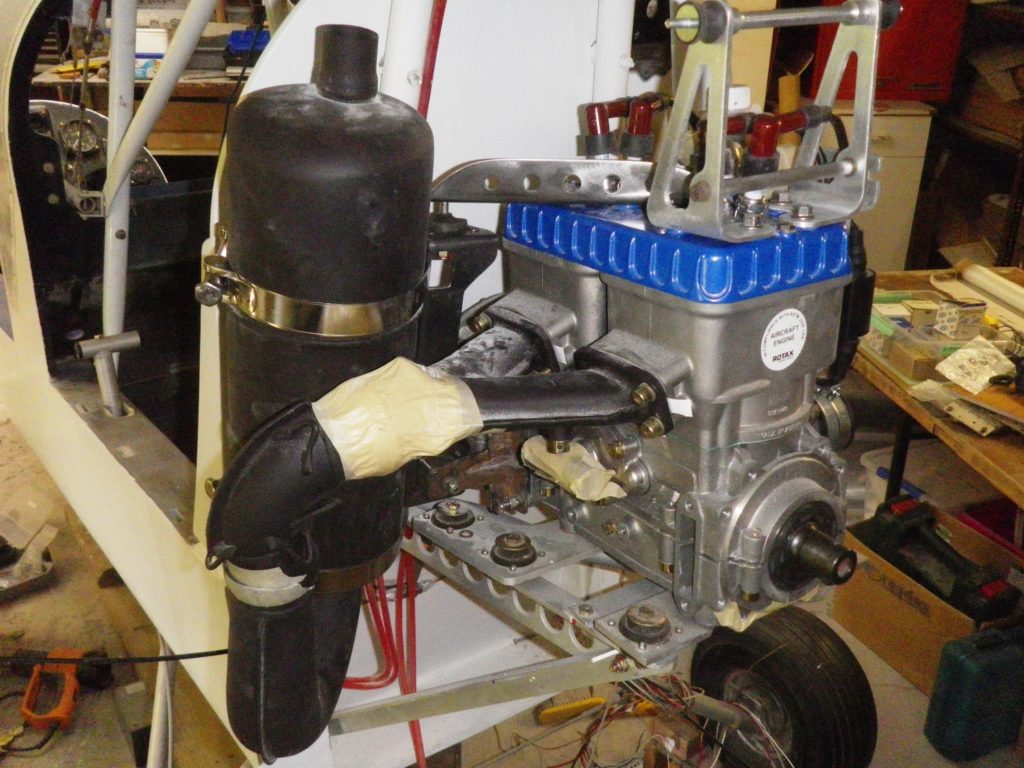 It was satisfying to get the new Rotax 582 out of its box and sitting on the Shadow’s engine frame at last.

But it was only there temporarily, as I took it off and put it on repeatedly while I did a series of jobs before it can be installed properly.

A small change in the 582 crankcase moulding necessitated grinding out two clearance scallops in the rear engine plate.

Next, I custom-made some exhaust mounts, taking care to have muffler tilted to the same angle as the rear bulkhead. The cylinder head mount neatly skirts around the spark plugs and features an access hole for the temperature sender. Stainless bands hold the muffler to its webbed mounting plate. Two LORD rubber mounts will help absorb vibration.

Lastly, I wanted to align the pull-start cover and re-route the starter cord, so it didn’t rub on the rear hanger tubes. I added a ‘turning’ block to achieve this.

Now it’s off to Leitch Motorsport, so Barry can weld on the 12 loops which take the 6 springs holding the manifold and elbow ball-joints together. 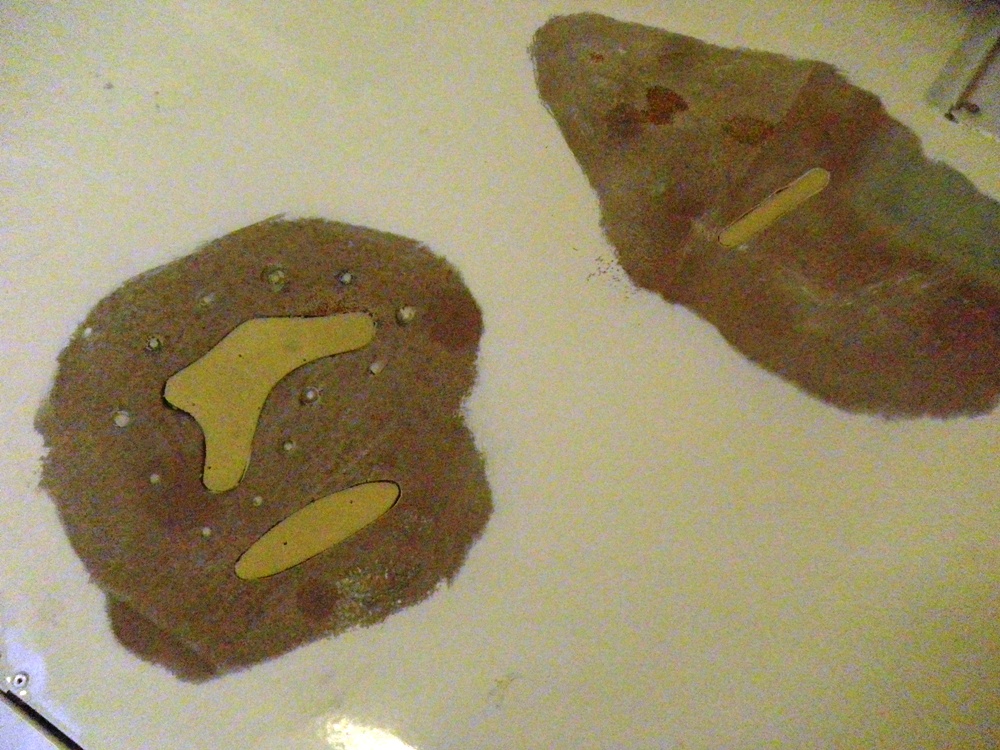 Sandwich construction allows microlight aircraft to have lightweight, stiff panels. But when they are damaged, the repair requires lots of patience and a light touch.

This tailplane (Horizontal Tail Unit) from a light sport aircraft had impact damage which required repair of the outer skin and foam core. In one place, the inner skin needed repair. All without being able to get inside the structure.

The tailplane was assessed externally, searching for any signs of deformity, delamination, etc. A borescope proved handy for a reassuring internal check. After carefully sanding the paint off the suspect areas, I could now see the structural damage. Mostly it was cracks in the outer skin, but in a few places the rigid foam core was dented or punctured.

The damaged foam core was delicately removed without cutting the inner skin. Sculptured pieces of specialised 3mm PVC foam were bonded in. Each damaged area was then skinned with lightweight fibreglass to recreate the original sandwich construction. Last job was to carefully fair the repairs using ultra-lightweight filler.

Very satisfying to get this tailplane back to rights. 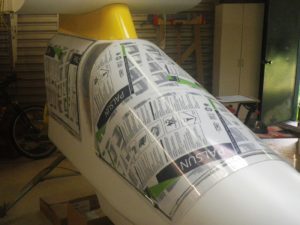 Over the past few weeks, I’ve been able to return to re-building my 1989 CFM Shadow ZK-KLH.

The next task was to make new canopy windows. Unfortunately, I couldn’t source tinted 1.5mm polycarbonate in New Zealand, so had to settle for clear windows. The old windows made good patterns, not only giving me the correct outline shape, but also allowing me to pre-drill the rivet holes. 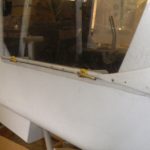 Each rear window had a single central latch which resulted in bent lower tubes, so I opted to replace these with twin latches to securely hold the window closed. I machined new latch axles from solid alloy and filed two ‘flats’ to positively locate each inner lever (i.e. it no longer relies on friction to stop the inner lever from rotating out of alignment). Overall, these new latches are stronger and more secure, but only a few grams heavier. 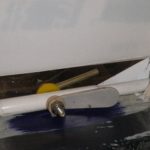 The rear windows also have a full-length lower tube (with a matching horizontal cut-out in the rear bulkhead), so that the lower rear corner of the window is not floppy. Where each latch is drilled, there is an alloy sleeve to strengthen the tube and reduce the tendency for the axle hole to wear.

PS: You can see the small side windows that were added to the canopy shroud. They will give the rear passenger a better forward view. 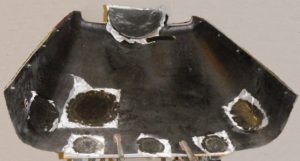 The top and bottom cowlings of a Rans S6 microlight needed quite a bit of re-building after a prop blade parted company with the hub just on take-off.  For a brief moment, the engine thrashed on its mountings and did lots of damage. The area behind the spinner was smashed and the cowling mounting holes where torn.

I carefully grafted in new carbon and repaired the cracks, taking care not to increase the laminate thickness.  The cowling mounting holes were reinforced with alloy inserts.  Since a different type of engine was being fitted a few changes were made to oil inspection flap, exhaust pipe cutaway, etc.